HAPPY NEW YEAR!
I do hope that everyone - including me -
to have a wonderful 2020.

Christmas as our house.
My son and his family came from Cincinnati.
So my small family were all together this Christmas.
We did get a new addition - another male - a cat named Shadow.
A Siberian cat - which is supposed to be non allergic.
Which I have to admit we all did pretty good with because we are allergic.

The one thing we were worried about was how Disco and Shadow were going to do with each other.

Here is the story in pictures. 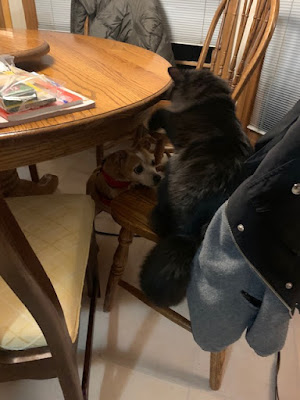 So many times when Disco was going at Shadow - Shadow jumped - and Disco had a hard time figuring that out. 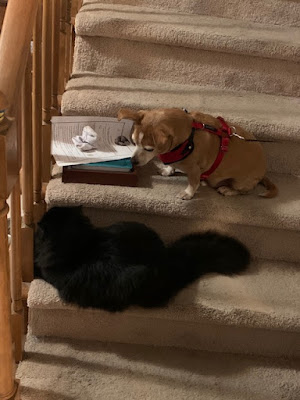 A pet stand off.  No animals were hurt at all!
They were both watched every single minute. 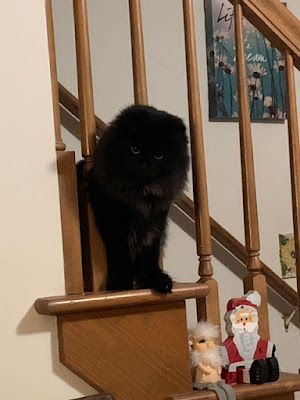 Shadow could go where Disco could not! 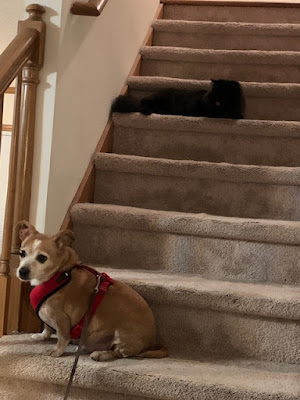 Surprisingly they got along a lot better than we expected! 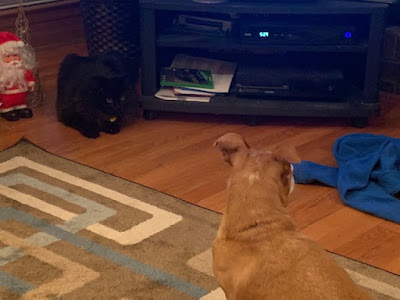 Sizing up each other - they did a lot of that. 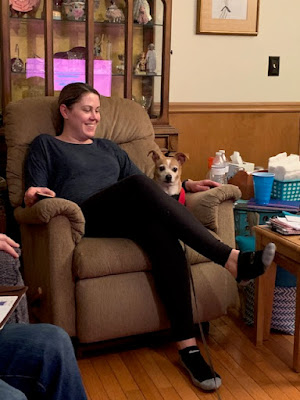 My dear DIL (who does not read my blog or knows of it) thought Disco wanted to sit with her.
He really didn't - that is HIS CHAIR and he was claiming it.
She is a little afraid of Disco - lol. 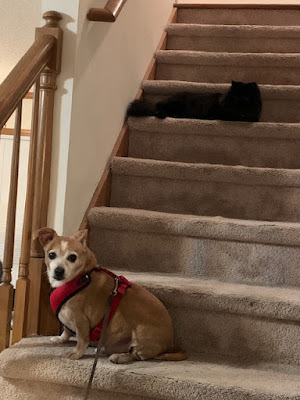 Disco wondering why this 'thing' is here in his house. 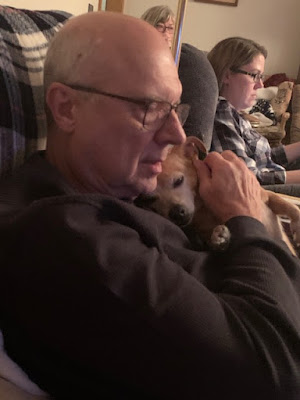 Okay Disco did get a little insecure and had to comfort him a time or two. 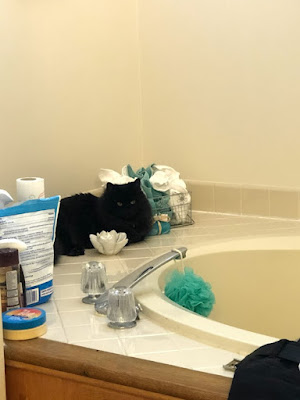 Shadow visited me when I was getting ready. 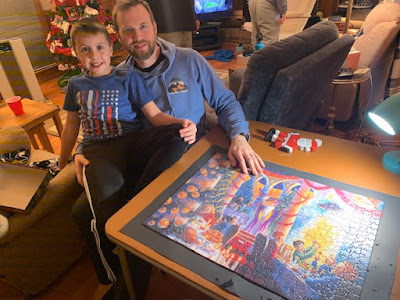 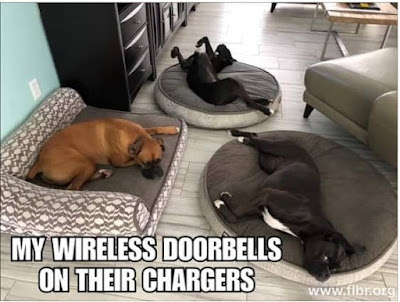 SOMETHING TO THINK ABOUT: 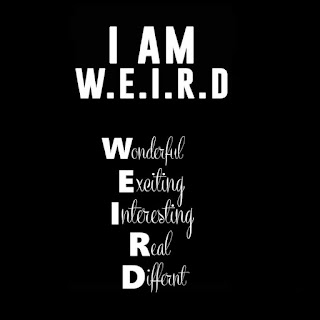 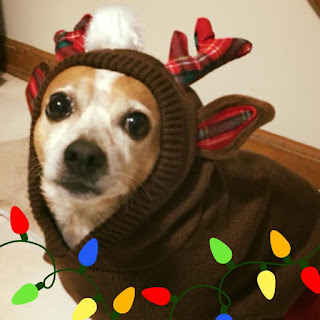 (See what my family puts me through?)

DISCO WANTS TO WISH EVERYONE A HAPPY NEW YEAR WITH MANY BLESSINGS! 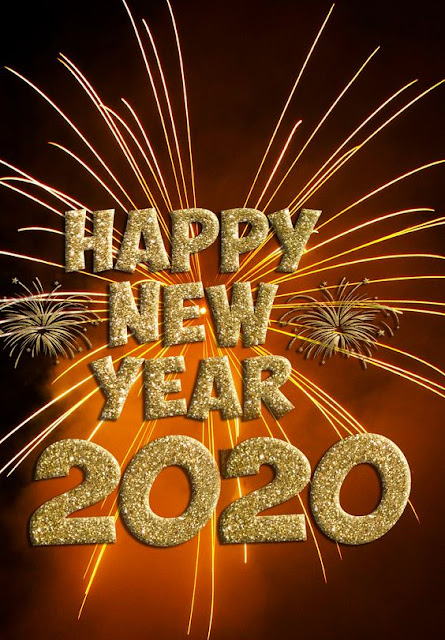 I was looking through all the lovely photos of all your family. :)

Glad you had Christmas, and Happy New Year to you! I hope it's a good one for you and your family. including the pets!

I'm not a cat person, but Disco sure is cute! Happy New Year! The puzzle looks like fun.

Looks like they finally were able to get along...I wish that for our world these days...hugs, Julierose

I am really shocked Disco allowed Shadow in the house at all. I hope they become good friends and maybe get to where they can sleep together. so glad for you having your family all together at one time in one place

Hi Sandie - it's always amazing how quickly they settle together ... love the four legs - but yes the family two legs are also extra special. Enjoy the year ahead - cheers Hilary

Shucks, now you have me missing my Feral Cat Stormy Daniels. WE enjoyed this entry VERY much. The pictures and narrative are great. So glad the whole family made it together. Looks like a good time was had by all. Your son's family makes a perfect family picture.
Love from down here.
Sherry & jack

I'm happy for you that you had you family all together. I do know how much tht means. We here though didn't have any visiting pet. They all stayed home. Whit all the people tht was a good thing. Glad disco behaved as well as he did. That is a big thing for a dog to accept a cat.d

I'm glad they got along better than expected. Looks like everyone had a great time. That's even better.

I linked this post to Awww Mondays. Lots of Awww here.

Have a fabulous day and a very happy New Year, honey. Big hug. ♥

Shadow is beautiful, and has the perfect name. How old is he, and where did you get him? Wow, the picture of them going at it on the kitchen chair!!! I hope you both come to adore each other! I think my favorite is shadow hanging out with you on the sink.

Happy New Year to you too!!
It looks like you had a wonderful Christmas with family and critters.
Its fun when the whole bunch can be together.
Our Granddogger was over for Christmas day. She's sweet and thinks she belongs right in the middle of everything. Of course there is no competition here. We have no pets so she gets all the loving to herself.
Looking forward to all of your great posts this year.
Sue

Happy new year to you too!! How could anyone be afraid of Disco?!! Those pictures of the animals getting used to each other are so cute! I'm glad you had everyone home for Christmas!!

how amusing watching disco and shadow becoming aquainted. they are too sweet, the pair of them. loved the sweater you put on disco for christmas. i hope you have a wonderful new year.

Happy New Year to you and your family!
So is the cat yours and how is it with allergies?

Good for Disco!
Before we located his owner, we had a cat … for about 4 hours. Much to Tom's dismay, our girls were NOT polite hostesses. I wasn't sure who was going to have a stroke -- the cat, little Grace or me! Funny now, but it sure wasn't at the time.

A fun post, Sandie. I love the pics of Disco and Shadow....the Shadow knows! Animals are always great entertainment, :)

Shadow is a beautiful kitty and it was great that Disco and he got along and there was no fur flying. I am sure, though, that Disco did not miss him when he left.

Wow, how did the cat end up in the family? I do hope Disco and Shadow keep getting to know each other and remain friends! Sounded like a lovely Christmas if your son and his family could come down from Cincinnati. Your young grandson (as opposed to your older grandson) sure is growing! I hope you all have a Happy New Year!

Hi There, Happy New Year.... Hope you had a great holiday this past month. We did --but it's nice to 'put it all away' for another year.... I get sad right after Christmas --but about this time in January, I'm glad it is OVER... ha

How is your sweet grandson doing in college? Still living at home? What is Kelly doing these days?

Miss you and apologize for not keep up very good.... The older I get, the slower my brain works... ha

HAPPY NEW YEAR DISCO! He looks so cute in that reindeer sweater. How wonderful that you got to see your dear ones from Cincinnati. Shadow and Disco looks like they made buddies with their visit. Thanks for sharing some of your photos from Christmas, Sandie. Love that w.e.i.r.d quote. I hope the new year is being good to you so far. : )

Happy New Year, Sandie! You are SO very weird :)
Shadow is such a cool looking cat! And Disco is cute as always. I'm glad they're getting along, welcome Shadow! I'm glad the whole fam was together.

Disco looks so festive in his holiday attire. Wishes for all the best in 2020.

Well, I think Disco deserves a treat for having to put up with a CAT in the house. I know how they can be! HA HA
I had to laugh at the wireless doorbells. We have an outside dog that barks at EVERYTHING, from falling leaves to snapping branches.

Happy New Year, Sandie. I have been so out-of-touch with everyone and everything. Please forgive me for not visiting more. You know I love ya- xo Diana

It looks like Disco was more interested in a relationship than Shadow at times, lolol. I am glad they got on okay to start with, that must mean they will get along great in the future. Hurrah for family coming home for the holidays. Happy New Year to you!

I'm pleased to read and see (great photo's) they got along better than expected.

It's lovely when you have your family around you … that looks a great puzzle.

All the best Jan

Oh Disco!!! Bless your little heart. You are doing just fine all things considered. I'm not sure I could share my lady with a cat! Love, Annie

Sandie, I'm so glad you had your family with you for Christmas. That is wonderful and such a blessing. Praying your new year is fabulous and full of joyful times. (Looking forward to seeing the adventures of Disco and the "newbie" and also how things go with your grandson!

Happy New Year my friend.
Time has a way of getting away from us.
I love each of your photos....and especially the one of your sweet fur baby getting comforted.
Precious....

I like Disco having his own chair. He looks somewhat like my dog, Bounce, which means Disco is incredibly cute. My cat and dog get along OK, I had the cat first and adopted Bounce 10 days after my hubby died. He saved my life!

Hi Chatty, I am glad we reconnected. You asked and yes, I am following you again, I am on that blog roll of followers on this main page of your blog. Are you following me? Have a great 2020.

Sandie, Disco stole this post!!! Well, Shadow got herself in it a bit. I will tell our daughter about Siberian cats. Her husband has terrible allergies and cats are high on the list. We were "blessed" with her Amber (tiger cat) four of the five they were living in London. That would be good as all, even the 10-year-old granddaughter, like cats. Dogs too!
I hope for you guys to have a HAPPY NEW YEAR also. We were out of pocket, I call it a Sabbatical from blogging, from December 3 through January 10th, on a cruise with three-day pre and post stuff at each end. We were on Oceania's small ship Nautica from Dubai to Cape Town, South Africa. We also visited Abu Dhabi and one other UAE country, Oman, four stops in India, and three Indian Ocean island Republics. Then to five Affrican east coastal stops. Fabulous way to sop up the kid's small inheritances.
But I did sneak around my warden to post ABC blog posts and a few 'poems' on my other blog. We are at "C" for another run.
..

The look on Disco's face while Shadow is on the step made me laugh.

I’m not able to see your photos but I have always loved your disco,, he and our dog buck could have been brothers , same temperament,, I hope they get along soon, I still hadn’t wish you happy new year! Happy new year! May it be the best year possible!

Disco is so adorable. Sorry I can't say the same about Shadow but I am HIGHLY ALLERGIC to all cats and so they kind of creep me out!!! I always enjoy videos of cats, though. They can do some very funny and curious things. They make me wish I liked cats...and wasn't allergic:) Hope you are having a happy new year so far too and that 2020 will be good to all of us. 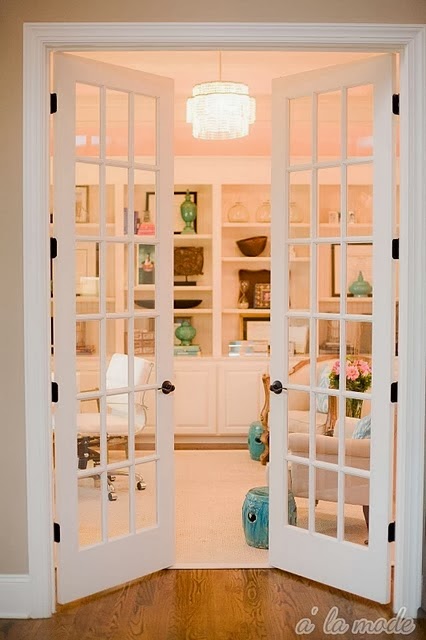 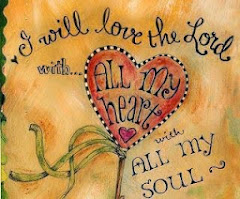 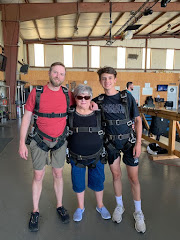 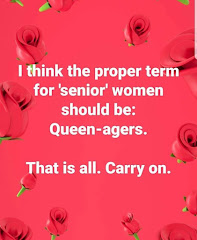 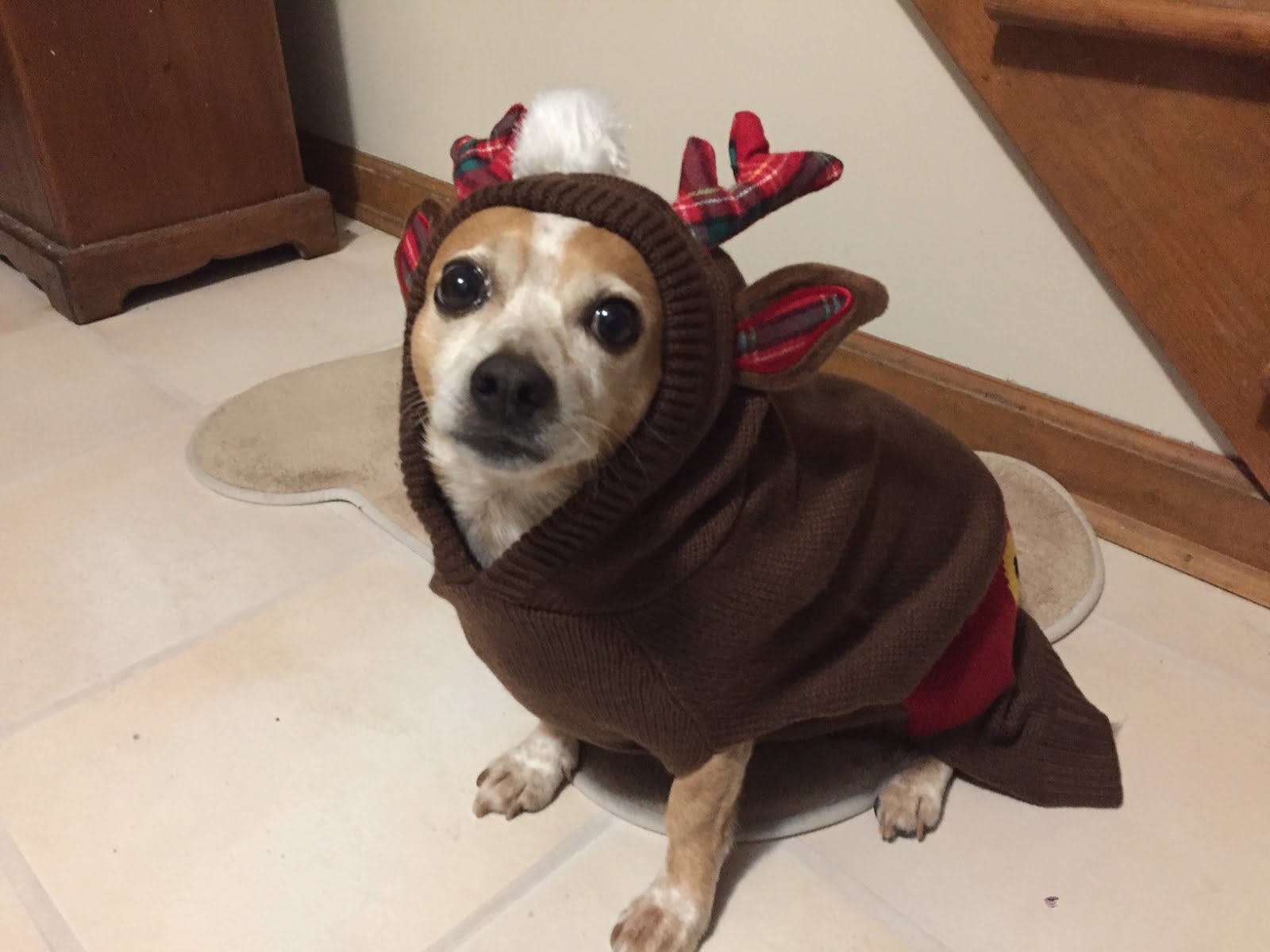 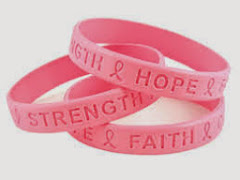 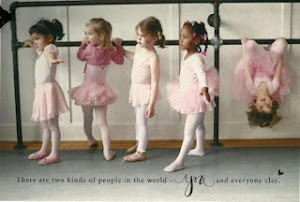 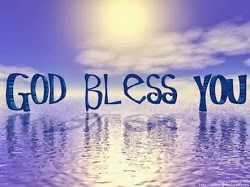